5 Beautiful Islam Architecture Around The World 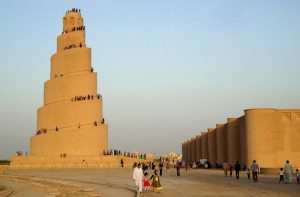 Europe was known as the king of architecture. If we look at photographs of ancient buildings in Europe, we will see a unique, luxurious and classy designs. Before these designs existed and became widely known, it turned out that Islamic architects also began to make beautiful buildings. The architecture they made were as good if not better than Europe. Islamic culture has produced various kinds of Islamic architectural masterpieces that are scattered throughout the world.

Islamic architecture is not only present in the mosques, but also in other buildings such as palaces, tombs, fortresses, and even public facilities such as bridges. Islamic architecture began to develop in the era of Islamic Caliphates by displaying unique and distinctive blend of architectural principles from four civilizations, namely Egyptian, Persian, Roman and Byzantine civilizations. These architectural elements are fully contained in five beautiful Islam architecture around the world. It thus ensure that the people who pray in it can feel closer to Allah SWT.

The St. Petersburg Mosque  was opened in 1913 and it was the largest mosque in Europe outside of Turkey, its minaret is 49 meters high and its dome is 39 meters high. The mosque is located in the center of St. Petersburg. The mosque can accommodate five thousand worshipers, which is surprising that such huge mosque actually exists within Russia which is known for its orthodox-ism. Around that time, the Muslim community in the Russian capital numbered 8,000 people. The architect Nikolai Vasilyev was the one who designed mosque and it was inspired by Gur-e Amir, the tomb of Tamerlane in Samarkand.

The walls of this magnificent looking mosque are made with gray granite. The domes and the two minarets or towers are covered with bright blue sky mosaic tiles which make this mosque stands out. Skilled craftsmen from Central Asia took part in the construction of the mosque. The front part of St. Petersburg is decorated with the words of the Qur’an using Arabic calligraphy with unique and detailed characteristics. The inner columns or pillars are made of green marbles.  The mosque’s floor covered with carpets made by Central Asian craftsmen. These combination of craftsmanship, fine quality materials, detailed mosaic, colors and calligraphy make this mosque very comfortable to look at.

Alhambra Palace was founded by the kingdom of Bani Ahmar or the Moors (Moria) from the North African region. The Moors were the last ruling Islamic empire in Andalusia (Spain). The construction of the Alhambra Palace was carried out in stages, between 1238 and 1358 AD The palace was equipped with a garden with beautiful and fragrant flowers. There is also Hausyus Sibb  or Garden of Lions which is surrounded by 128 poles made of marble.

Inside of the palace there are various beautiful rooms, namely the Al-Hukmi Room (Baitul Hukmi), Bani Siraj Room (Baitul Bani Siraj), a square-shaped room with a building area which is filled with Arabic calligraphy decorations. There is also a Sprinkling Room (Hausy ar-Raihan), which contains al-birkah or a pool in the middle position whose floors are made of white marble. There are many more rooms which are also equally beautiful. This palace complex is also with a mosque, the Al-Mulk Mosque, where people can praise Allah.

In addition, the palace is surrounded by a reddish plastered castle. The outer walls and inside the palace are often decorated with calligraphy with distinctive carvings that are hard to find today. In its heyday, the palace was equipped with valuable items made of precious metals, silver, and beautiful tapestries. The complexity and variety of this palace is a testament to the high quality Islamic Architecture.

The Great Mosque of Samarra is a very unique old mosque that is located in the city of Samarra, Iraq, and was built in the 9th century. The mosque was ordered to be built in 848 AD and construction was completed in 852. The mosque was built by the Bani Abbasid caliph, Al-Mutawakkil, who was in power and ruled Samarra from 847 to 861 AD. The architecture of this mosque mimics the building structure of the Tower of Babel that symbolizes arrogance, human pride, mentioned in the Book of Genesis, the Old Testament Scriptures. However this mosque has very different meaning to the Tower, instead it symbolized that the highest place is  only for Allah SWT as the Lord of all beings in the sky and the earth.

The mosque most unique feature is The Twisted Minaret or The Snail Shell Minaret, where the Azan is being done. The minaret was constructed in 848–852 by using sandstone, and it is very different among other mosques minarets in the world because of  Samarra Mosque’s tower has an ascending spiral conical design. It is 52 metres high and 33 metres wide at the base, the spiral contains stairs which reach to the top.

Sultan Amir Ahmad bathhouse is located in Kashan, Iran. It is a classic public bathhouse which has a very beautiful structure and historic value. The place is unchanged since it was built during the Safavid kingdom in the 16th century. With its structure and artistic decoration, the site has become one of the attractive tourist destinations in Iran.

One of the bath room is called Sarbineh,  it has octagonal in shape with an octagonal pool o in the middle. It is surrounded by eight large pillars. This place is a dressing room where those who take baths exchange clothes or chat. The location is connected to the main bathing area called Garmkhaneh, where several private hot spring pools are located. The connecting corridor has a special structure to create heat and humidity exchange.

The majority of the building’s interior is decorated with turquoise and golden mosaics, in addition to beautiful walls and ancient paintings. Meanwhile, the bath dome is fitted with convex glasses to allow natural light to shine inside while at the same time can hide the users from the outside. Since 1956, the Iranian Cultural Heritage Department has designated the bathhouse as a Iran’s national cultural heritage site. The name of the bathhouse was taken from an Iranian leader Imamzadeh Sultan Amir Ahmad whose tomb is located not far from the location. The bathhouse reminded us that Islam loves cleanness and cleanness is part of Iman.

Taj Mahal is a magnificent mosque shaped monument which is located in Agra, India. It is among one of the most well known buildings that humanity has ever built . It was built on the wishes of the Mughal Emperor Shaah Jahaan,  as a mausoleum for his Persian wife, Arjumand Banu Begum, also known as Mumtaz-ul-Zamani or Mumtaz Mahal. The Taj Mahal is the masterpiece of Islamic Mughal architecture.emperor of the Mughal Empire had great wealth during his heyday. In 1631 his wife died while giving birth to his daughter thus when he was mourning, he ordered the construction in order to show how much he loved his wife.

The Taj Mahal which has repeatedly been included in one of the wonders of the world version of UNESCO makes this building the most recognizable Islamic architecture in the world today. Around this building is covered by white marble which is decorated with a blend of Islamic, Indian and Persian architectural ornaments.

So which of the five beautiful Islam architecture around the world that you would like to visit?

The History of Hajj, A Spiritual Travel To Mecca

How to Strengthen Silaturahim in Islam in 5...

5 Dua for Solar Eclipse in Islam Based...

5 Benefits of Reading Surah Yaseen for the...

5 Benefits of Memorizing 99 Names of Allah

How To Deal With A Spoiled Child in...

How to Teach Salah to Toddler in Easier...

How To Perform Ruqyah on Yourself?

How To Protect Yourself From Black Magic In...