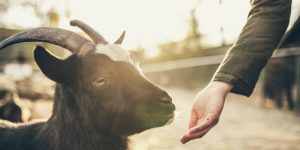 Eid Al Adha is one of the two holiest days in Islam, the other one being Eid Al Fitr. The day is also sometime called as Eid Qurban or The Festival of Sacrafice in English speaking countries. It is celebrated once every year on 10th of Dzul al Hijjah which is based on Islamic lunar calendar. On this day, Muslims all over the world will do Eid prayer in the morning and then continue to sacrifice animals whose meats will be distributed among the community. You must be wondering why Muslims celebrate this holy day and what is the history behind it. So we are going to get to know Qurban in Islam, Learn The History.

The term of Eid Al Adha is originated from two Arabic words. Eid means celebration while Al Adha means the sacrifice of animals. Qurban also has same meaning as Al Adha hence  we can either call this holy day as Eid Al Adha or Eid Qurban. To participate in Qurban means that you participate in the slaughtering of the sacrificial animals.

Qurban is one of the form of worships that is prescribed in Islam. Slaughtering sacrificial animals as a worship has an astonishing historical background. The story started when Prophet Ibrahim AS received revelations from from Allah Subhanahu wa ta’ala in the form of a dream that commanded Prophet Ibrahim to slaughter his own son, Ismail.


Narrated in the Nobel Quran Surah Ash-Shafaat verses 100 to 111, Allah SWT tells us about the origin of Qurban, a true story of sacrifices. When Prophet Ibrahim was 100 years old he had not been blessed with any offspring  and so he always prayed to Allah SWT to grant him a faithful son who could help him with his affairs since the prophet was getting old.

His first wife, Sarah knew about her husband longing, however she was barren.  She was unable to get pregnant. Sarah, understood the weight of his husband’s duty, then let Prophet Ibrahimh second wife, Siti Hajar, a former slave, whom he married when the Prophet Ibrahim made a friendly visit to Egypt. From Siti Hajar was born a son who was later given the name Ismail. Shortly after, Prophet Ibrahim took the wive and his infant son to the place near where Kaaba would later be built.

Ismail then grew to be Ibrahim’s favorite son. But apparently Allah SWT had different plan for them. On day, according to some historians, when Ismail had reached a prophetic age, Prophet Abraham had a dream that Allah SWT commanded him to slaughter his most beloved child. Whose heart will not feel sad when he was ordered to slaughter the child he adored the most? Whose heart will not feel heavy facing such a bitter command?


Despite feeling bitter, Prophet Ibrahim knew that it is something that he had to do as a servant’s of Allah. So he revealed his dream to Ismail. In Holy Quran Surah As Safaat verse 102, the dialog between Prophet Ibrahim and his son Ismail is told. Prophet Ibrahim said to Ismail, “O my son, in fact I dream of slaughtering you, so what do you think?”. Even though it is such a shocking revelation, Ismail calmly answered his father, “O my father, do what is commanded by Allah, you will meet me as a patient person,” answered Ismail.

Subhanallah!  Listen to the answer of the Prophet Ismail. Even though he was still child, he understood the meaning of true devotion. Prophet Ismail is very devoted to his parent, but more importantly he is also a child who is very submissive and obedient to his Rabb.

Shortly after the surprising revelation, Prophet Ibrahim and Ismail headed to the place where the slaughter would take place. The location is in accordance with the Prophet Ibrahim’s dream. The place lays somewhere in Mina, Mecca.

When they were walking to the location, Satan came and tempt the prophet to not slaughter his precious son, Ismail, not only once but three times. But every time the Satan came, Prophet Ibrahim was not swayed by the evil temptation, he drove the Satan away by throwing a small pebble seven times at it while saying “Bismillahi Allahu Akbar” until the devil disappeared. What he did set the example for The Stoning of the Devil or Jamrah Throw, to which all of Muslim who went to do Hajj replicate until today.

It was difficult to reach the place with the devil tempations, however both of them presisted and finally arrived at the place where the slaughter would take place. Prophet Ibrahim prepared everything. Then he put his son Ismail on a rock, on a small hill. These two faithful servant of Allah were ready. Their submission and sincerity had reached their peak just as described in Surah As Safaat, verse 103. Both of them submitted to Allah’s will and Ibrahim laid his child on his temple (to carry out Allah’s command).


Then Prophet Ibrahim swung his sword.

However, just before the sword hit his beloved child, Ismail’s neck, Gabriel, one of Allah’s servant angel, swoop down and held the sword at the nick of time. Then Allah revelation came down following the sudden turn of event.
Allah SWT says in the Holy Quran Surah As Safaat, verse 104 to 108 that
Prophet Ibrahim, he truly had fulfilled the vision. Allah SWT then rewarded Prophet Ibrahim because  he had done good by following the command faithfully, and Ismail being obidient and patient, and that it  truly was a real tough test. Allah SWT replaced Ismail with a larger sacrafical animal, some scholars say that it was in a form of big male sheep. Allah SWT also imortalizes the event in Al-Quran and the later generations are mandated to follow the example of the two prophet, peace be upon them.

The story experienced by the Prophet Ibrahim and Prophet Ismail, a historical event which will never be forgotten as Allah had guaranteed, is the basis origin of why  Muslims on the Eid al-Adha are mandated to sacrifice animals. Qurban beomes a proving ground for Muslims that in order to increase piety and patience, we have to be ready at any time to sacrafice what we love if Allah SWT commands it.

By following the example of Prophet Ibrahim, we can gain a lot of benefits such as:

The wisdom behind sacrifice is training to empithize with out surroundings. Those of us who have had an excess of wealth, we should participate in qurban, and those who can not afford it, to help with their body to prepare the meat. The meat then can be distributed to those who are in needs.

Qurban is one of Allah’s commands which is explicitely listed in the Qur’an. Our faith will get stronger and we will feel closer to Our Maker. It also taught us to be patient and learning to let go our wordly desire because only our Taqwa to Allah can save us, just like how Ismail and Ibrahim was saved by Allah’s reward.


Sacrifice requires many conditions that must be met. You may afford to participate in Qurban but sometimes some of us might not be willing to do it. To Qurban is to prove to Allah that we do not cling to our possession and always ready to devout it in the way of Islam. We also do not do Qurban so that people will think that we are generous, but truthfully for Allah.


There are many lessons we can learn from Qurban in Islam, Learn The History of it. May Allah SWT always shows us the righteous path and can follow the example of Prophet Ibrahim and Ismail to always be devout and patient. Amen.

5 Beautiful Islam Architecture Around The World

Zakat, A Charity Practice From Islam

History of the Islamic Golden Age Empire in...

A Brief History of the Battle of Trench...

A Brief History of the Battle Of Hunayn

Sunnah Fasting in the Month of Muharram that...

Recognize The Culture Of Islam In Java Island:...

A Holy City of Mecca: A History In...

The History of Hajj, A Spiritual Travel To...