Philosophy in Bismillah, Meaning and Value 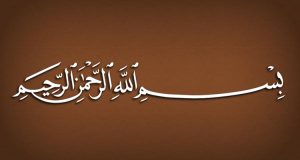 Begin your all of your activities by saying the name of Allah Subhanahu wa ta’ala, the Most Gracious, the Most Merciful. What does it really mean to say the lafaz of Basmallah or Bismillaahirrahmaanirrahiim? Saying the name of Allah is not only just spoken in tongue, but it also implies that we are fully convinced that the activities we are going to do is inseparable from Allah’s permission, will and power.

When we are about to do something, we require time, opportunity, strength, ideas, health and so forth. All of that aspects can only be attained if we have the permission and grace from Allah SWT. We may  be able to create a careful plan with clear and accurate steps to achieve something but often we end up with unexpected results. We can only plan but only Allah decides the outcome. We are going to learn the philosophy in Bismillah, meaning and value.

The Meaning of Basmalah

Basmalah is the opening remarks of Bismillah, by itself it has the meaning of “By the name of Allah”. The complete pronounciation of Basmalah is Bismi-llāhi ar-raḥmāni ar-raḥīmi. This sentence is stated in every prefix of the Surah in the Holy Book of Qur’an, except in Surah At-Taubah. Basmalah is said every time a Muslim about to performs prayers. Muslims are also advised to say Basmalah before starting any activities. Basmalah  is usually also used as an opening sentence (Mukadimah) in the constitution, speeches, or charter in Islamic countries, including Indonesia.

The sentence of Basmallah was also written at the time of the Prophet Sulaiman when he sent Queen Bilqis a letter, it stated in the Holy Qur’an Surah An-Naml, verse 30. Bismi-llāhi ar-raḥmāni ar-raḥīmi (بسم الله الرحمن الرحيم)
which in english it transltes to “In the name of Allah, the Most Gracious, the Most Merciful”.

We as Muslims are strongly recommended to read Basmalah before starting every activities. The activities that we are going to do is intended in the name of Allah and hopefully our activities will be blessed.

Basmilah is indeed an opening to do something. Here is the complete meaning of Basmalah explained from each phrase.

Benefit and Value of Reciting Basmalah

Even though Basmalah is very easy to say, the philosophy in Bismillah, meaning and value is very deep and comprehensive. It also has various benefits to those who recite it. Here are the benefits and value of reciting Basmalah in our daily life:

It is time for us to get used to saying the word Bismillah before doing  every activities so that we are always in a state of safety, blessed and successful. These habits should be tought from young children so that they understand well what is the meaning of Basmalah and how the efficacy of the word Bismillah is. In conclusion, Bismillah is revealed by Allah SWT as a sacred sentence that is the written in the Holy Qur’an which is easy to recite but has deep meaning and many benefits if we can understand the words. We have to always remember Allah constantly and geting used to reciting Basmallah will help us. Aamiin ya rabbal ‘alamin.

Recognize The Culture Of Islam In Java Island: A Unique Character

8 Etiquettes while Visiting the Sick and Its Verses