The Manners of Children Towards Parents in Islam and Its Verses 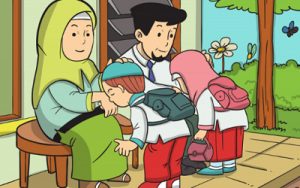 The birth of a child in a family is a gift and happiness. When there are so many couples that do not have a child although they have tried hard. Be grateful for you who have been blessed with a child.

When we have a child or even more, then it has been an obligation for the parents to raise and educate them until they are ready to live independently.

Besides the knowledge about religion, such as the kinds of the knowledge of tawheed, a child must also be taught about ethics and manners in the daily life. One of them is the manners of children towards the parents.

What are those? Check out below!

Parents are the first people who will be recognized by the children. The parents’ kindness to the children is so great. So, a child should know how to serve his father and mother. As it is stated in the following verses of serving the parents.

“And your Rabb has ordered human to not worship other than only to Him and they should be kind to both parents as well as possible. And if one of them or both of them are old by your side then do not say ‘ah’ to both of them and do not shout at them.” (QS. Al-Isra: 23)

Looking at Parents with A Good and Not Sharp Look

A child must respect and love his parents. One of them is keeping the look and words in front of parents. Lower the voice and do not look sharply are the form of noble akhlaq in Islam. As it is described in the following verse.

“And say to both of them the noble words and lower yourself towards them with full of love. And say, “O my Rabb, love them as they loved me when I was little.”” (QS. Al-Isra: 24)

“If the companions talked with the Prophet, they were lower their voices and they did not look sharply as a form of exalting to the Prophet.” (Hadith Al Bukhari 2731)

Do Not Interrupt the Parents’ Words

Interrupt the parents’ words is a bad deed. This also applies to the others, it is either younger, the same age or older. Then the next manner towards people is giving parents a chance to finish what they want to say without interrupting or preceding their words.

Do Not Sit When in Front of Parents Who Are Standing

In Islam, we should be able to dispute the culture of non-Muslims. As it is stated in the verse above.

Those were the manners of children towards parents in Islam and its verses that we should be able to practice in the daily life. As good Islam people, we should keep improve the effort in doing the kinds of good deeds so that the love for Allah subhanahu wa ta’ala increases. Aamiin.

7 Manners of Neighbors in Islam and Its...